Into The Ego: Our Condition 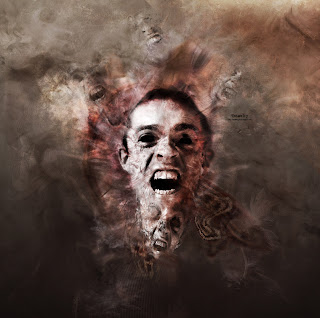 The human mind is fragile. Any level of self-remedy is thwarted by our own impulse to self-sabotage. Our mental or inner world are a constant of being deceived and deceiving, in which extensions of love from a caring creator are projected to be threats against our conflicted souls. Our ego functions as to purposely hide the truth from us. Living within our self-created delusions and projections, we are deceived by the seduction of our own self-perpetuated lusts. Extending our unbiased love to others only to relize what was extended as sincere has been misinterpreted through the projections of another.

The unhealed mind faces varying degrees of these types of projections, demons of our past, derived from unhealed emotions caused by perceived attacks and afflictions:'Each one peoples his world with figures from his individual past, and it is because of this that private worlds do differ. Yet the figures that he sees were never real, for they are made up only of his reactions to his brothers, and do not include their reactions to him. Therefore, he does not see he made them, and that they are not whole. For these figures have no witnesses, being perceived in one separate mind only.

It is through these strange and shadowy figures that the insane relate to their insane world. For they see only those who remind them of these images, and it is to them that they relate. Thus do they communicate with those who are not there, and it is they who answer them. And no one hears their answer save him who called upon them, and he alone believes they answered him. Projection makes perception, and you cannot see beyond it. Again and again have you attacked your brother, because you saw in him a shadow figure in your private world. And thus it is you must attack yourself first, for what you attack is not in others. Its only reality is in your own mind, and by attacking others you are literally attacking what is not there.

The delusional can be very destructive, for they do not recognize they have condemned themselves. They do not wish to die, yet they will not let condemnation go. And so they separate into their private worlds, where everything is disordered, and where what is within appears to be without. Yet what is within they do not see, for the reality of their brothers they cannot recognize.'

In the beginning God created man and woman in his image. '… And they were both naked, the man and his wife, and were not ashamed.'

God created man and woman to live in perfect emotional and mental freedom without inhibition, shame, or guilt.

The Beginning Of The End

Later God spoke to Adam and said not to eat of "the tree of the knowledge of good and evil." The implications of judging from good and evil are profound. This is a depiction of God forbiding man to set himself up as a god unto himself; judging The Creator, himself, and his brother. God's concern for man was only because he understood that allowing man to be the judge of good and evil would only hurt man.

In his own judgment man has no choice than to feel guilty, because of the predilection to judge himself first as unworthy or to feel ashamed as Adam did in the garden. From the moment that he allows his fragile mind to judge everything in degrees of good and evil he loses a sense of confidence and loses his identity.

The Beginning Of Destructive Emotions

So here we have shame for the first time. Adam was ashamed of himself misjudging himself and than extended that same judgment to Eve.

In similar scenarios we either become self-condemning or critical of others, which is just our projected guilt… "I'm tired of feeling guilty all the time…so now you're guilty." We play this strange type of tag, not realizing that "[There is] therefore now no condemnation to them which are in Christ Jesus…"

Usurping The Judgment Of God

Shame is only felt when we perceive to be separated from our creator: 'And he said, I heard thy voice in the garden, and I was afraid, because I was naked; and I hid myself.' As exemplified in Adam's judgment of Eve before God '...And the man said, the woman whom thou gavest [to be] with me, she gave me of the tree, and I did eat.'

It is by the insight, and by understanding the nature of God and our nature through God that the miraculous occurs. All we need to do is trust the process, healing will take care of itself, as an extension of this self-perpetuating revelation.

Salvation is nothing more than "right-mindedness," which is not the one-mindedness of the Holy Spirit, but which must be achieved before one-mindedness is restored. Right-mindedness leads to the next step automatically, because right perception is uniformly without attack, and therefore wrong-mindedness is obliterated. The ego cannot survive without judgment, and is laid aside accordingly. The mind then has only one direction in which it can move. Its direction is always automatic, because it cannot but be dictated by the thought system to which it adheres.

Every day we are given the opportunity: to obey the holy spirit and not eat of the tree of the knowledge of Good and Evil. Every day we choose to eat of the tree; by feeling condemned or guilty, or becoming critical of our brother, and of God.

Feeling condemnation or guilt connotes punishment, for wrong doing. If Christ is your home there is no punishment- this is an extension of his grace. And it is certainly not your place to be condemning toward your brother, unless you are attempting to set yourself up as a god.

I leave you with these parting words:

Nothing real can be threatened.
Nothing unreal exists.
Herein lies the peace of God. - ACIM

Into The Ego (Series)